by Jackie Ryan on December 14, 2020 in Hidden gems, News & Announcements

On Paper, an exhibition at the Olivier Cornet Gallery, Dublin, continues our discussion about artists’ use of paper as a base medium, and how it is considered by many to be fragile or ephemeral.  Museums happily display three dimensional sculpture and oil paintings in the assurance that their condition will not deteriorate through the museum atmosphere or light.  However, Covid-19 has rapidly changed how audiences engage with art online.  Galleries and Museums who have embraced digital technology have seen a surge in visitor numbers, and active engagement online from their audiences. At a time when over 70% of people under 25 years of age get their cultural consumption through a screen (Understanding the Impact of Digital on Live Performance, Arts Council of England 2016), it is inspiring to see artists who work on paper making excellent digital images from their work to share with audiences globally. On Paper celebrates the craft of paper-making, the robustness of it as a medium , and its flexibility to be photographed or filmed to share with new audiences. The works I have included to exhibit alongside recent works on paper by the group artists of the Olivier Cornet Gallery were deliberately chosen to highlight an area of an artists oeuvre which in many ways is less known.  The purpose is to celebrate the medium, and its importance in Irish art history. Éamonn O’Doherty (1939-2011) commenced his career as an architect, and then became one of Ireland most beloved sculptors.  His sculpture Crann an Óir (Tree of Gold) was commissioned in 1991 and graced the plaza in front of Sam Stephenson’s Central Bank building on Dame Street Dublin, and became so iconic the bank included it in its logo and branding.  While many people are familiar with the sculpture, and indeed its part of the logo of the Irish Central Bank, so few people will have tracked its inspiration from years earlier in O’Doherty’s work.  Here I have selected a little known Japanese Linoblock print of the same subject – circular canopied tress, on a fine Japanese paper, with gorgeous marks that show where the linoblock met the paper for the first time in 1976, fifteen years before the sculpture Crann an Óir was made. 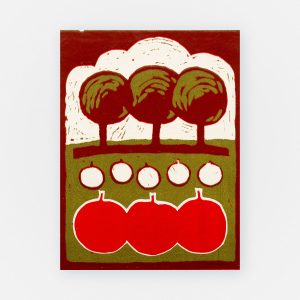 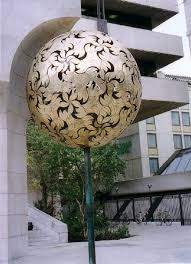 I love the work of Harry Kernoff (1900-1974).  As an artist who was often strapped for cash, he made many works on paper when he did not have the funds for canvases.  Many of his woodblock prints were handprinted using wood blocks made from Lyons tea chests.  The Kernoff Collection in the National Library of Ireland contains some of these treasures.  I have included here in the show, Portobello Harbour from 1940, before much of the Harbour was infilled.  It was a key docking station for many Dublin supplies coming from inland on the Grand Canal. This woodblock features a Turf Boat image signed with Kernoff’s signature green pen and indeed hand colouring (which he often did using standard children’s markers).  80 years on – it is as vibrant today as it was in 1940, so has lasted at least one lifetime, to be enjoyed by the next.  Portobello featured in Harry Kernoff’s first book of Woodcuts published in 1942 by Cahill and Company Dublin.  The thin woodblock used to make the print, WB9, is preserved for future generations to enjoy in the National Library’s Archive . 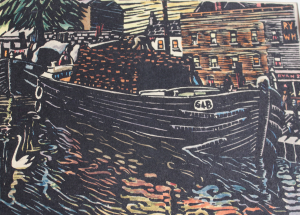 Barbara Rae RA (b. 1943) has made suites of stunning etchings throughout her career in the UK, Europe and the USA.  Rae spends much of her year in New Mexico, and the strong sunlight permeates her colour palette.  I always loved seeing her work with the master-printers at Graphic Studio on large scale prints.  The giant etching press was put into commission and the luscious light fast colours would roll off the perspex plates onto coveted small editions of these prints.  Winter Light is from a series ten years earlier than the works in progress I photographed below. The piece I selected for the show is unusual in that it shows Winter Light, in soft grey tones, unlike the fiery colours we are used to in her work. 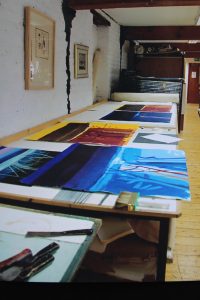 William Crozier (1930-2011) spent much of his life living and working in West Cork.  His work reflected the landscape and the seasons, and he loved the technique of carborundum etching, where he could paint swathes of texture on perspex plates, inks them and print onto heavy eching papers, which would embrace those cuts and folds into the print, giving a beautiful painterly texture to the work.  ‘Winter Cut’ is one such etching, made during the 1990s in ‘The Graphic’ when the studio was in the heart of Dublin Docklands in Green Street East (A former Raleigh Factory which now forms part of AirBnB’s European Headquarters building on Dublin’s Quays).  This is a work I selected due to its vibrant colour (Crozier used Charbonnel light fast inks in his etchings), which reflect many of Crozier’s oil paintings of the same subject.  This work on paper condenses so much of Crozier’s techniques into a little jewel of a work. 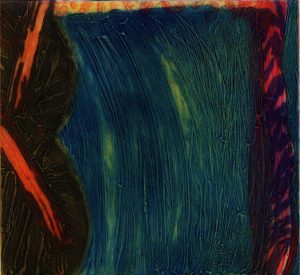 John Keating (b1953) creates large oil on canvas works in his Dublin studio.  However he has also spent much of his working life in Italy, as he is represented by a number of galleries in Northern Italy.  His subject matter often covers extremes, hands and feet, contorted in dramatic gestures.  For many years Keating has also experimented with works on paper, in many instances using hand made paper, adding a coarse and tactile texture to the work.  He uses watercolour and conte on paper, often with scores of vibrant pigment added later in the process.  This work Hands Fragment, was made in 2002, and is on handmade paper in which the rough edges become an intrinsic part of the art.  The surface of the paper undulates under pressure, as if the hands are tearing it open… 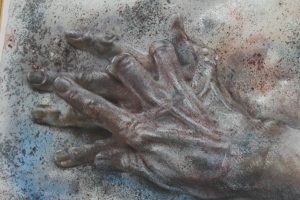 In 2009 Scottish artist Paul Furneaux (b. 1962) won the international Dublin City Council Red Stables Residency and came to Dublin to make art in both the former Red Stables Studios and in Graphic Studio Dublin.  He shared much of his knowledge of Japanese Woodblock (mokuhanga) techniques through workshops and master-classes through the summer of 2009.  His master-class on woodblock blades, and tool sharpening is a beautiful memory of the residency, and Furneaux’s rare skills in this beautiful medium.  Furneaux’s current work ‘City Trees’ and ‘City Lights’ uses sculpture and print in response to a recent trip to Tokyo.  The print in this case remains close to its timber ally – where often they are intrinsic, and yet separated once the ink has been transferred. In On Paper I have included a tiny gem of a woodblock print in this exhibition to show the butterfly emerging from the woodblock, as it did on that sunny day in Red Stables Studios as part of a public master-class.  The second inked block waits patiently for its connection to its paper partner… 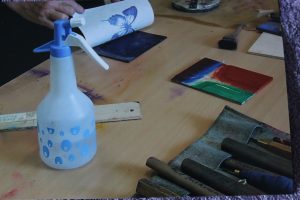 Emerging being printed in Red Stables by Paul Furneaux 2009

These works are exhibited among a range of works by OCG Gallery artists, until February 2021. The past 8 months has seen the Olivier Cornet Gallery (OCG) alongside galleries worldwide embrace new ways we can engage with art through video clips of the process of art being made, through online viewing rooms and in the OCG’s case through their novel 3D Virtual Space.  The gallery is currently open by appointment, but in the event of further public restrictions, one can visit the exhibition online.

So much great art emerges from the fragility of change.  Artists are among the most resilient and adaptive people I know.  They have rapidly changed the way their art is made through the lens of Covid-19.  The pandemic has inspired many to make new work, and to use media which communicates with audiences in new ways.  While 2021 will hopefully bring more human interaction physically with each other and with the presentation of art, there is no doubt that many of the technologies used in 2020 will continue to shape and change the way artists make art, and the way audiences engage with that art.