I first encountered the magic of John Keating’s work when I was Education Officer in The National Gallery of Ireland in the 1990s. Keating had hosted the extraordinary Christmas Art Holiday a few years earlier – a sort of Irish visual arts festival which originated at the Gallery in 1962, in which up to 2,000 young people would draw while spread out on the floor of the Shaw Room in the Gallery, while an artist took the stage and talked them through the process of making a work. You couldn’t do that now of course, 2,000 children and not a parent in sight…Still, many artists I meet often tell me they loved learning to draw there as children.

John Keating was born in Tipperary, and studied at Crawford College of Art Cork, Trinity College Dublin, Loughborough University and the Arts Students League of New York, which he attended as a Fulbright scholar. Keating has exhibited nationally and internationally including exhibitions in the U.S.A., Italy, Spain, Greece, Monaco and China. His work is included in private and public collections in Ireland, the U.S.A., Australia, Italy, Greece and England. Keating has guest lectured and tutored on the drawing studies course at the National Gallery of Ireland, National College of Art and Design, Dublin Institute of Technology and at the University of Pittsburgh, U.S.A. 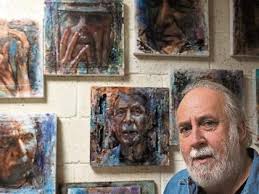 Keating’s work is classical in form, respecting age old traditions of drawing and painting, and often including the human form in his figurative works. While many of his larger works are executed in oil on canvas, he has always been a gifted draughtsman with pencil, conté and ink on paper. He cites early childhood working with wet paper, making papier-mâché and feeling the texture of the form of the paper as an inspiration for working with it as an art medium. As a professional artist he attended paper making master-classes at Fire Station Studios with artist Helen Comerford, who taught him hand formed paper making. This changed the way he worked with drawing on paper, often using the bumps or paper texture as an intrinsic piece of a composition. He cites how later making work for the XV Triennale Internazionale D’Arte Sacra in 2000, in which he was an invited artist he had a ‘happy accident’ of drawing a crown of thorns and the paper ‘revealed’  straw climbing through its surface as if it knew the artist’s intention for this particular piece of art. The Triennale D’Arte Sacra had previously hosted the work of Marc Chagall, Barbara Hepworth and Giorgio de Chirico.

2020 has been an extremely difficult year for many artists, at a time when cultural venues are closed to the public. Keating’s work was selected this year for a number of prestigious projects including at the Piazza Maggiore Bologna, at which he was awarded the Unesco 1st Prize for Painting.  Keating’s work was also selected for the exhibition of the Fondazione Cesare Pavese, celebrating the Italian writer’s life.  Appropriately for the year it was, the exhibition celebrates the sentence of Pavese: “The only joy in the world is to begin. To live is beautiful because to live is to begin, always, at any given time”.

To see John Keating create his own self-portrait in 2020 as part of An Arts Council of Ireland award, view the short film here: https://www.johnkeating-art.com/updates

John Keating’s work can be seen at On Paper, at the Olivier Cornet Gallery until 14th February 2020